A history of Greenwich Village

The neighborhood now known as Greenwich Village spent its pre-urban years as marshland before it was cleared and turned into pasture by Dutch settlers in the 1630s. As its name suggests, it first developed as a village separate from New York City, which flourished on the lower tip of Manhattan. By 1797, the Village was home to Newgate Prison, New York’s first penitentiary, and around this time some of the present-day Village began to be used as a potter’s field—the remains of some 20,000 of New York’s poorest 19th century citizens still lie under Washington Square. During yellow fever epidemics, the Village also served as a place where wealthier New Yorkers found refuge from the disease. As the city spread north, the Village slowly grew less remote and eventually was absorbed by the urban sprawl.
In 1857, architect Robert Morris Hunt designed the Tenth Street Studio Building, which featured artist studios arranged around a central domed gallery. It not only housed the first architecture school in the United States, but also quickly attracted artists from across the nation and world: Winslow Homer worked there, as did many of the the painters of the Hudson River School.

Greenwich Village soon gained a reputation as an artistic hub, and an 1858 article in The New York Times noted the rise of a particular type of New Yorker, the so-called bohemian. “Bohemian is now heard almost as frequently as the once unknown term of loafer. But a Bohemian is not quite a loafer, though he is not far removed from one. The Bohemian is either an artist or an author, whose special aversion is work, and whose ambition is to excel in some particular walk for which Nature never designed him.”

Below is a picture of Schnabel's immense Palazzo Chupi in the West Village. 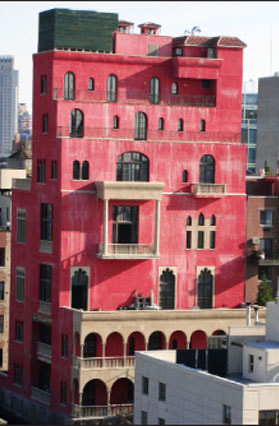